Why (And How!) You Should Hold Your Own Keys 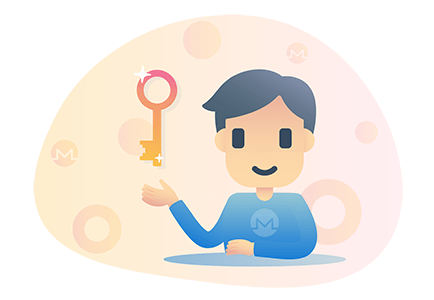 Have you heard the phrase “not your keys, not your coins” before? This has become a ubiquitous phrase in the cryptocurrency community, but despite most people having heard it the vast majority of cryptocurrency users do not hold their own keys.

The benefits of cryptocurrency that truly set it apart from the traditional financial system are only realized when you have complete custody of your funds – holding the private keys to your coins.

In this brief post we’ll dive into why you should hold your own keys and give a few easy ways to self-custody your Monero today.

Why is holding your own keys important?

One of the most commonly misunderstood aspects of self-custody in Monero is that if you do not hold your own keys, you gain little to no benefit from the privacy Monero offers. As the sender of a transaction has full visibility into the true spend, amount, and recipient address, if you are not the one sending the transaction and instead leave that to an exchange or custodian, they have full visibility into the ways you spend your Monero.

Thankfully, after they send the funds, Monero’s privacy guarantees kick in and provide strong “forward-secrecy”, but it will be clear to the exchange or custodian where you sent the funds and how much you sent initially.

It enables the incredible censorship-resistance of Monero

One of the foundational aspects of Monero is enabling censorship-resistant transactions – allowing you to make transactions that may or may not be approved of by “them”, no matter what they try to do to stop you. While the need for censorship-resistance may be a bit lost on those of us in “free” countries, the rapid slide toward authoritarianism and political decay in many parts of the world is making it more apparent by the day that we need a way to transact with or without governmental approval.

If you do not hold your own keys, however, a government or regulator can easily force an exchange or custodian to blacklist your funds, seize them, or censor transactions to specific addresses. This is already happening broadly due to state-level sanctions today, and will be an increasing theme as governments and regulators realize that exchanges and custodians are the easiest path towards control over Monero’s usage.

The day could also come where a government will outlaw self-custody of Monero, and if you haven’t yet withdrawn your Monero from an exchange or custodian you may not ever be able to.

It prevents simple theft or confiscation of your Monero

A hypothetical, but possible, scenario could be the worst-case for those who choose not to hold their own keys – their Monero getting stolen by a hacker or confiscated by a government with a 6102-like order.

Almost $500 million in cryptocurrency was stolen from centralized exchanges in 2021, and $3.2 billion total stolen from users who gave up custody of funds for one reason or another. This is one of the largest risks to cryptocurrency users, and continues to grow in both case-count and volume as cryptocurrency gains popularity. If an exchange holds the keys to your funds, those funds can be stolen by a hacker (or the exchange themselves!) at any time.

If you hold your own keys, the only real risks of theft or confiscation are scams and physical attacks, something that is much less likely and usually only happens to high-profile individuals or those harmed by the theft or loss of know-your-customer (KYC) data from centralized exchanges that links their ID and address with cryptocurrency ownership.

Another important aspect of holding your own keys is one that is less personal and more communal. When the vast majority of users in Monero hold their own keys, exchanges are less able to lie about the amount of Monero they custody and trade “paper Monero”, as users are not keeping their Monero in exchanges.

While this type of activity is not often confirmed publicly, there are many in the community who are concerned that exchanges like Binance are leveraging the Monero it’s users hold on the exchange to trade against Monero, inflating the amount of Monero shorts and causing price suppression over time.

This behavior can also lead to liquidity crises where users who do want to hold their own keys are unable to withdraw from the exchange as the exchange has promised more Monero to it’s users than it actually has available. The more Monero users hold their own keys and keep their Monero off exchanges, the healthier and more natural the market will theoretically be, and the less risk malicious or greedy exchanges can pose to the stability of Monero’s price.

How do I hold my own keys with Monero?

When you start to hold your own keys, the most important thing to remember is to save and keep your seed phrase safe! This is the set of 14 or 25 random words that any Monero wallet will give you when you create a wallet, and is all you will need to get your funds back if you lose your phone, your desktop, your laptop, or you forget a password.

Treat this seed phrase as if it is worth all the Monero in your wallet, as anyone who gets it will have complete access to the funds in your wallet. It’s ideal to keep it in a safe or secret location, preserve multiple copies in case of fire or natural disaster, and never show it to anyone.

If you’re mainly a desktop user and don’t spend/receive Monero on-the-go very often, there are a few solid choices for holding your own keys without needing to rely on any third-parties.

For those of us that like to be able to use our Monero on the go or spend frequently, having a solid mobile Monero wallet that still keeps our keys in our own hands is immensely important.

Hopefully this post has helped to cement the need for holding your own keys, as well as pointed you to some of the excellent wallets in the space.

The more you take Monero into your own hands and actually use it, the more benefit you can get both now and in the future. Monero is not just a speculative asset – it’s a powerful tool for freedom and financial privacy that is much-needed in the world of today and the future ahead of us.

Now go get those coins off an exchange and dive into what Monero was built for.