A Brief History of Monero 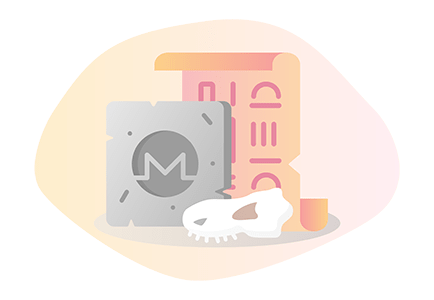 Few cryptocurrency projects have origins that are shrouded in mystery. Most have an identifiable founder, and many hyped up their projects before launch to maximize profits from an ICO. Bitcoin seemed to stand alone in having a whitepaper that was dropped out of nowhere on the cryptography community, and having their founder, Satoshi Nakamoto, disappear.

But before we even start talking about Monero’s launch in 2014, we need to go even further back.

In September 2013 a previously unheard of group, Cryptonote, released a whitepaper about a novel protocol under the same name. This protocol sought to make a Bitcoin-like cryptocurrency, although utilizing optional ring signatures and stealth addresses to bolster the privacy. Not long after, in November of 2013, initial code was pushed to GitHub for a new coin called Bytecoin. This coin implemented the protocol described in the paper, on a brand new codebase (i.e. not forked from Bitcoin like most other coins at the time).

The Bytecoin team took their time putting the rest of the code on their repository, but seemed to be done by March of 2014, when the project was subsequently ‘discovered’ by a ‘random’ person on the BitcoinTalk forums, though it is now widely suspected that this was a plant to generate interest. After the sockpuppet succeeded in garnering eyeballs, those newly interested people discovered something strange: over 80% of the coins had already been mined.

This was an astronomical amount, and many were willing to write it off as a scam and move on; that is until the Bytecoin team showed up. They claimed that the reason so much of the coin had been mined by this point was because Bytecoin was actually not a new coin with a massive premine, but had actually existed on the deep web for two years, since 2012.

Long story short, these claims were not well received, as nobody had heard of Bytecoin before, and it didn’t take long before people lost interest. Not everyone was willing to completely give up however. Some began looking over the Cryptonote protocol that Bytecoin was based on and concluded that the protocol itself seemed to be solid and innovative, even if the first implementation wasn’t.

At that point, it was a race to see who could fork Bytecoin, clean up the code, and be the first ‘non-scam’ version to market, in order to gain a first mover advantage.

On April 9th, 2014, another previously unheard of entity named thankful_for_today posted on the BitcoinTalk forums, announcing the launch of the first Bytecoin fork, called Bitmonero. Since it was the first fork, Bitmonero quickly gained attention and a small community formed around it when it launched on April 18th, eager to continue where Bytecoin had left off, but it didn’t take long for something to smell fishy about Bitmonero also.

The founder, thankful_for_today, proved difficult to work with. Often disappearing for days at a time (very strange for a brand new coin in the first days of development), and would often go against the community by trying to merge mine Monero with Bytecoin, adjust the issuance schedule, and generally refusing to cooperate with the consistent core group that had built around the coin, going so far as to have his own website, BitcoinTalk post, and repositories.

It soon became clear that the core group that had built up around Monero were far more active and competent than thankful_for_today, and, despite being invited to take part several times, he eventually disappeared and became a footnote in Monero’s history. Many years later, it’s suspected that he was also secretly a part of the Bytecoin team. Why? Well, during all of this, Bytecoin themselves had not been sitting idly.

The Bytecoin team was not happy. Their plan at getting rich off of their lie from their massively premined coin had failed. They had put all of the work in developing the protocol (there is strong evidence that the CryptoNote developers and Bytecoin developers were very closely related), and had nothing to show for it.

But they weren’t done yet. They launched a new coin, Bitmonero, under a new pseudonym, thankful_for_today. In fact, why stop there? Since they were the most familiar with the code, they could launch several new coins with slightly differing emission schedules and names, with new accounts and nobody would be the wiser that it was them all along. So they did. Fantomcoin, Monte Verde, Dashcoin (not to be confused with Dash), and more forks all appeared not long after Bitmonero was launched, and tried to take a part of the marketshare.

These attempts ultimately failed, as Monero outgrew their competition quickly, and leaving little doubt as to the winner of the CryptoNote coins.

But even still, scams did not stop there. Bytecoin had one last trick up their sleeve. When thankful_for_today released Bitmonero, he released a deliberately deoptimized miner alongside it. He kept the optimized version, and hoped to amass a large stash for himself, but these deoptimizations were quickly caught by the core team, as well as other, independent groups, and even this was fixed in short order. With this, their last scam, defeated, Bytecoin retreated into the dark, only coming out to do bogus rebrands and announcements in the height of the 2017 cryptocurrency market boom to try to squeeze out any last profit from their scam at the expense of their tiny, unsuspecting community.

Not many coins can boast about having a founder that is not with them any longer. Indeed, Bitcoin and Monero are probably the two biggest examples. While a comparison may show Bitcoin in a more charitable light, there are lessons to be gleaned from Monero’s scammy beginnings also.

Bitcoin showed what can happen when one person is tired of the current system, and dares to step up with innovation to challenge the status quo. Monero shows the power of a community that refuses to be fed lies, finds the truth for themselves, and retakes the tools with which they can build their freedom. Monero may have started as a scam, but it has truly evolved into a powerful weapon to take back our financial privacy.