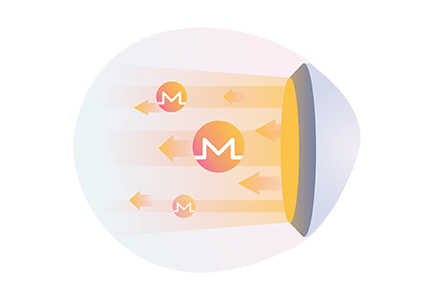 Monero, like other cryptocurrencies, uses outputs as a means of accounting for funds. Many crypto savvy users have probably heard this term before, but not everyone understands what they mean and how they work. As explored in our ring signatures article, outputs are the actual unit exchanged on the blockchain between transacting parties. Similar to a dollar bill, but the amount is not in a fixed denomination.

Monero works similarly. Suppose you run a store and make three sales on three different items. You might receive 1.5 XMR, 2.25 XMR, and 5.25 XMR for a total of 9 XMR, but you also have three different outputs in your wallet of the denominations stated previously. Just like with the dollars, you might want to pay someone 3 XMR. You could use just the 5.25 XMR output, and receive 2.25 XMR back in change, or you could combine the 1.5 and 2.25 XMR outputs and get 0.75 XMR back in change.

Let's go back to the example of sending 3 XMR to someone, and you use the 5.25 XMR output. Now, while you wait for you 1.75 XMR back in change, you cannot use it. This 1.75 XMR is inaccessible to you. But you can still use the 1.5 XMR and 2.25 XMR outputs, as these were not spent. Going back to the dollar example, if you paid someone $8, as in the example before, you would not be able to use the $2 that you expect back in change until it is given to you, but in this example, you still have a $10 bill that is unused in your wallet. This can still be used to purchase whatever you want while you wait for the change. The same with Monero.

This is often a point of confusion for new Monero users. Often, a user may just have one output in their wallet, received from an exchange or a friend. Let's say this output is 20 XMR. They have no other outputs in their wallet. They now want to make a donation to two of their favorite charities. They send 5 XMR to the first charity and then are confused because, even though they should have 15 XMR left, they cannot immediately send the next donation to the second charity. As you might have guessed, this is because the 15 XMR is locked. It cannot be spent until it is returned as change (10 confirmations or around 20 minutes). After their funds are unlocked, they would be able to send their second donation.

Some cryptocurrency wallets have a feature called ‘output management’, which simply shows a user which outputs they currently have (in addition to their total sum), as well as allows them to choose which ones they want to use when they spend their cryptocurrency.

As of now, the Monero GUI does output selection for users automatically, as users selecting their own outputs often leads to confusion or, in some cases, harmed privacy. There are wallets under construction however, such as the new Feather wallet project, that will contain these output management features.

We’ve been talking a lot about the sending portion, but something fascinating happens on the receiving end. Going back to our example of sending 3 XMR to someone, and using your 1.5 XMR and 2.25 XMR outputs in the transaction (while expecting 0.75 XMR in change), the receiver does NOT receive two outputs of 1.5 XMR and 2.25 XMR. They instead receive ONE 3 XMR output.

In the background, the protocol combines all outputs used for spending, and gives the receiver one output of the paid amount, and sends one change output back to the sender. So the sender will also receive one output back as change, regardless of whether they used two, three, or ten outputs to send the transaction.

We hope this has cleared up some confusion about outputs and how the internal accounting of the protocol works, as well as the common user facing problem of confusion when encountering locked funds. In another article, we will explore managing your outputs so as to minimize the chance of having to wait for unlocked funds before sending future transactions.